20th on the grid. 3rd in my class. 56.68. Session red flagged with someone parked on the circuit. Just getting in to the swing of it. Should go quicker later. 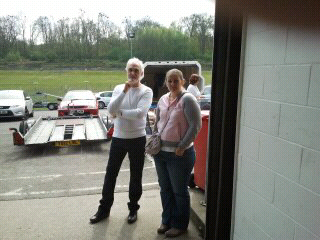 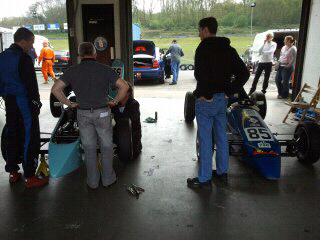 Parked in the garage for the night ready for tomorrows meeting. 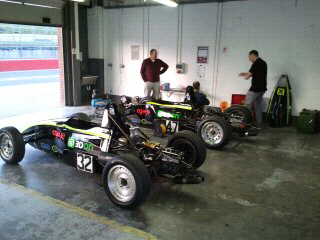 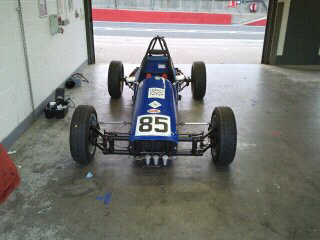 I could do with making a fuel stick so we know when we've got 9 litres in the tank. 6 or 7 for the race and a couple left for the scrutineers if they feel like really testing Shell Optimax fuel is what it says on the can. Its nothing sophisticated... its just a stick with a mark on it that you dip into the tank via the fuel filter. If the mark is above the dipped wet petrol mark put in some more and if its over just leave it. Its not F1...its club racing.

The front suspension had a bit of surface rust. Rust and a racing car should never go together. Its an uphill battle trying to keep a vee clean when using an open trailer. So its out with the hammerite and a brush. I was looking at the results this morning - looking good. All that DIY....I joke...I've painted 3 rooms in my life...has improved my painting.
Posted by T at 4:46 PM No comments:

I am liking the Coulthard and Brundle partnership. I liked Coulthard comments which highlighted the difference between a positive racing driver and a negative pundit (Ted Kravitz). When Button's engineer said that the maximum anyone had done on this Pirelli was 15 laps and he planned to do 18 laps - Coulthard read that as a challenge, Ted saw that has a message to slow down. I wonder how Button read it. I am not sure that seeing Pirellis disintegrate and drivers having to do 4 or 5 stops is good for the company's image. How many people are going to know they were asked by the teams to produce such a tyre. This looks like bad PR - watch our tyres fall apart 20 times a year in front of the biggest TV audience. I wonder if Pirelli said to the teams - how about screwing up one pit stop a race that they would comply or anything that makes them look bad. All this technology with opening wings and kers is not needed - isn't it so simple - just stick on big tyres and make the wings out of mesh so they look like they do now (which isn't exactly very pretty but at least there is some space for the sponsors logo) and reduce the downforce so you don't need to be a fighter pilot to follow. Also put some springs on the cars too but probably not as much as Petrov would have required to keep that on the ground. Revert them back to 1982 levels of downforce and sit back and enjoy.
Posted by T at 4:50 PM No comments:

Email ThisBlogThis!Share to TwitterShare to FacebookShare to Pinterest
Labels: F1

At silverstone there was 2 distinct odours in the car. Cow poo and burnt rubber. Most laps nothing and then you would be hit with a strong smell of either. The burning rubber was not me pressing the red button and releasing the nitro stored cunningly in my fire extinguisher (oh j'sus the cat is out the bag now) and lighting up the rears. No it was some essex boys drifting some Nissan 370Zs near the track. The cow poo smell I can only assume was from some excited cows watching my killer overtakes (yep 3 Ffords down the straight who might have been coasting)... either that or somebody was using some very old fuel...
Posted by T at 4:07 PM No comments:

At silverstone petrol station you can buy endurance 102. Now if you think normal petrol is expensive then look away. 290 a litre. I wonder when normal petrol gets this expensive will people still carry on driving aimlessly around ?

Taking a rest between sessions. The sun is out. Track is very busy with formula fords testing for tomorrows start of their series. Car is running but wouldn't complain if i was quicker. Main thing is its going well and we live to fight another day at brands next weekend. 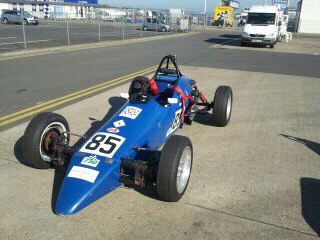 Friday morning and off to silverstone. 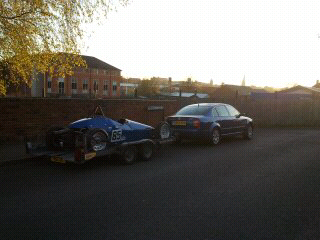